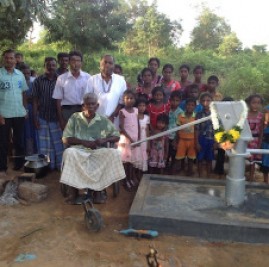 During my travels through Sri Lanka last year, I recognized a water problem in resettlement villages in the Mullaitivu District. Because this region was greatly damaged during the war, people build temporary shelters and living quarters. Among these resettlers, there are ten families living in the far end of this large village where there are no water facilities. They must walk long distances to obtain water for their daily use. Last year we built a tube well for these ten families.

Since then we have bean receiving requests for tube wells from many villages. In some areas there are up to twenty five families living without water facilities, facing the hardship.

We are happy to let you know that in the past three months through the Manitha Neyam Water Project we have competed six tube wells and two conventional wells in the Vanni region.

Water in these villages existed, but reaching it would require drilling over 100 feet. We accepted the challenge and brought machines from miles away to begin drilling the wells. Thankfully, we reached water at a depth of 120 feet. Next, we constructed a handpump for these six tube wells, as well as two conventional wells. Now these villagers are relieved they no longer have to walk long distances for water.

It is an awesome experience to witness the completion of each well. The villagers all gather and perform the Puja to the new well, and they do the Pongal and enjoy the Prasadam together–young and old thanking us for building the well for them. It is a humbling experience.

My sincere thanks go to the devotees of the Washington Murugan Temple and their friends for their generosity. Also, thanks to Manitha Neyam Trust and its Jaffna coordinator, Mr. Jeyasingamm, and our local coordinator, Mr. Sutharsan, and everyone who helped us accomplish this worthy project. Herewith, I am enclosing for your enjoyment some photos of the new wells.